Celia has declared this week to be International Scone Week 2014 (you can read here why it’s been declared), so everyone is jumping to it and baking scones as if they’re all housewives in gingham aprons from the 1950s.

Scones are the one thing that so often disappoint when eaten outside the home; they can be dry and tasteless, served with a mean little foil wrapped butter pat and a miniscule helping of jam encased in plastic. The point of a scone is that it should either be light and airy, serving purely as a vehicle for an enormous spoonful of rich, clotted cream topped with jam or should contain copious quantities of cheese and be eaten warm from the oven, slathered in butter.

The recipe I use for scones is scribbled on a scrap of paper and I know not of its provenance, though I think it’s just the basic recipe that everyone starts with.

Put 225g plain flour and 2tsp baking powder into a bowl with a pinch of salt and rub in 60g butter. Add a couple of spoonsful of ‘on the turn cream’ (you know, the dregs that sit in the bottom of the carton just outside the sell-by date but not yet mouldy) or if you don’t keep that sort of thing in your fridge, then yoghurt will suffice. Stir in enough milk to make a soft but not sticky dough, turn onto a floured surface and gently pat into a round that’s three or four centimetres thick. Cut into six wedges, brush the tops with milk and bake for 10 – 12 minutes at 220C. Wrap in a tea towel and leave to cool on a wire rack.

Apparently the trick with scones is to get them from bowl to oven as quickly as possible, with as little handling as you can manage. If I was Glenda, then I’d probably experiment to see if these words of wisdom carry any weight along with all the other old wives tales surrounding the making and baking of scones, some of which Liz writes about here. 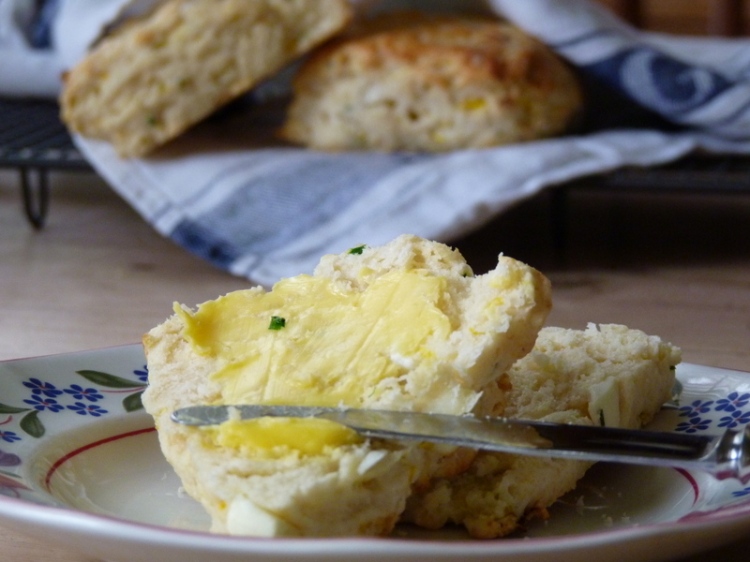 Though these are the scones I bake most often, it seemed a bit tame to make plain scones for International Scone Week. As you may know, in the garden we have an abundance of courgettes so it was but a simple and logical step to incorporate them into the scone recipe. Just before I added the milk, I mixed in 70g of grated courgette, some snipped chives and 40 g cubed feta cheese. I would have used cheddar but we had some feta that needed to be finished. Such is life.

It’s a recipe that I shall be repeating and though I wouldn’t bother buying a courgette especially to make them, it’s a very good way to use up surplus courgettes. In fact, the only drawback is that it just used one courgette and not half a dozen.

Anyone can join in with International Scone Week. Share your scones on your blog or one of the other places where everyone shares things. Find out more at Fig Jam & Lime Cordial.